The Purpose of TeachBeyond

God has called TeachBeyond to be an agent of Holy Spirit empowered transformation among those whom we serve: educators, learners, organizations, and communities.

Educators will be effective models of an integrated life. Learners will be holistically transformed and transformational. Organizations will achieve optimal mission effectiveness. Communities will experience redemptive renewal.
For a more complete understanding of what this means, you can download the TeachBeyond Organizational Purpose document.

Is God calling you to pray, give, or go?

Apply to Go Learn more about our vision

George Durance was born in Canada in 1951. He was educated in Canada, the United States, and England, and received diplomas and degrees in biblical studies, history, and education. He earned his Ph.D. at the University of Durham, UK, and is the recipient of a number of awards and honorary titles. His professional career began as a high school Social Studies teacher in Calgary. Three years later he moved to Germany where he taught at Black Forest Academy, becoming principal of the school in 1987 and director in 1992.

Dr. Durance returned to Canada in 1997 to become the president of Ambrose University College. During his twelve-year tenure he not only helped reposition the school as a liberal arts university, but also relocated the school to another province and built a new campus. In 2009 he accepted the appointment of president of TeachBeyond. He has helped cast a new vision and introduced a strategic planning process. This has led to the merger of several organizations and the launching of significant educational initiatives in East Asia, India, Europe, Africa, and South America.

George is married and has three children, seven grandsons, and one granddaughter. His hobbies and personal interests include music, literature, sports, epic movies, landscaping, and long walks/hikes. He is actively involved in a local church and has been a board member of two schools and one mission society. He has stated that his intention as a leader is to ask God for impossible things – things that only God can do – so that the Kingdom is furthered and Christ alone is glorified.

TeachBeyond was born on the western Canadian prairies in 1954, when Leo Janz committed himself to bringing the biblical message of hope to post-war Germany. Several members of his family joined him to create The Janz Brothers Gospel Association, which began broadcasting over Radio Luxembourg in 1955. News of the Association’s radio, church, music, and educational work spread to German-speaking communities in Europe. As opportunities grew, the original Janz Association established various national Janz organizations to serve needs in Europe and South America. 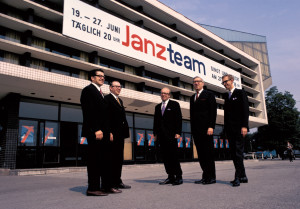 In 2006 the Board of Directors assessed the status of the organization and came to the conclusion that it would be appropriate to recast the vision and undertake new initiatives. Out of this came the phrase, “teach beyond,” which subsequently became the name of the organization in 2009. This change was coterminous with the appointment of a new president, Dr. George Durance, and the establishment of a US office in the Chicago area. Dr. Durance introduced a strategic planning process that resulted in a five year Plan known as “Educating for Transformation: the Birth of a Dream 2010-15,” that was adopted by the Board in April 2010.

Want to get involved?

Not the location you are looking for? View all of our addresses.